We arrived late last night by train and were really relieved to get off at the right station and find taxis waiting! LiDu Hotel is huge! The front desk staff were very keen to help us, which was a welcome change after Kashgar! Breakfast was extensive, and one Mama was curious about our knives and forks as she ate her fruit with chopsticks!

Our guide book was published in 2013…and things have obviously changed! We walked a few kilometres today, looking for the Ancient town. Seems the front of it has been demolished! We were stopped by a group of young police, who wanted to know what we were doing! We told them we were walking to the river from our hotel, they seemed quite surprised. We showed them the map of Australia, and then our passports. They were taking photos of various pages and us! In the end I asked them to pose with Lionel as well!

We followed a side road, which also had police checkpoints and by chance found a mosque and remnants of a beacon tower…not much left. The old town alleys were being dug up, looked like for new plumbing. We walked through about four checkpoints and then on the fifth one the two police officers looked like they were undecided about whether to let us continue. After phoning someone, they too took pics of our passports…we laughed and said they were probably adding to our dossier!

We visited the Subashi Buddhist Ruins, which were about 20km out of town. Just driving through the villages was very enjoyable. Glimpses inside their high whitewashed walls reveal cool shady courtyards with raised platforms with all sorts of paraphernalia spread about. Houses are reached across small wooden bridges over canals (or open drains), the streets are tree-lined and swept clean. Once you get to the city, there are whole blocks of demolished low rise houses…more high rise planned perhaps? 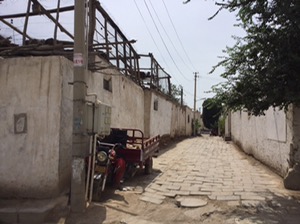 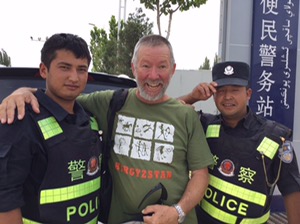 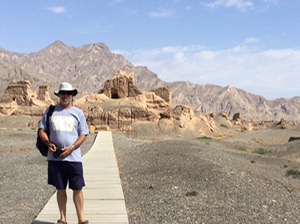